Adapted from a post originally written for Transdisiplinary Design Seminar in Fall 2015
by Kelsye A. Gould

Efficiency is commonly defined in the dictionary as “the ability to do something or produce something without wasting materials, time, or energy,” whereas productivity is “the rate at which goods are produced or work is completed.” In other words, productivity is a measure of the efficiency of outputs. In the early 20th century (right about when Henry Ford introduced the assembly line model) the efficiency movement took off in industrialized countries around the world with the goal of eliminating waste and increasing productivity. Today, it is seen in corporations across the globe from Lean and Agile production processes to Six Sigma operations methods.

As a young designer, I had to learn to work efficiently and productively, which sometimes meant relaxing some of my perfectionist standards. Once I started doing this, however, my creativity really started to flow. Rather than hinder my work, I found that the time constraints in this fast-paced, on-to-the-next-thing environment simply became another design constraint—a challenge within the framework of my work.

That being said, I also realized that there were limits to my productivity-driven efficiency. Some days, I would attempt to work at my day job for 8 hours, followed by freelance work for several hours. It was an exhilarating experience to work on so many projects in a small window of time, but it was not a sustainable lifestyle. My relationships suffered, my mood suffered, and my creativity suffered. I began to understand the value of non-work time to not only recharge one’s batteries, but to also find accidental inspiration and ideas in completely unrelated activities.

Looking back at my childhood, it was often the out-of-school time where I had a chance to play, to make, and to experiment that nurtured my creative spirit. Indeed, as Bruce Nussbaum argues in his book, Creative Intelligence: Harnessing the Power to Create, Connect, and Inspire, time to one’s self and free time to “play” are essential when it comes to fostering creativity and innovation. In 1948, 3M famously implemented a policy in which employees were mandated to spend 15 percent of their working hours on projects of personal interest. In a 40-hour work week, one would have six hours of paid free time to explore the things that interested her or him—with no expectations or strings attached. Numerous game-changing innovations (Post-It Notes and painter’s tape, for example) have stemmed from this program. 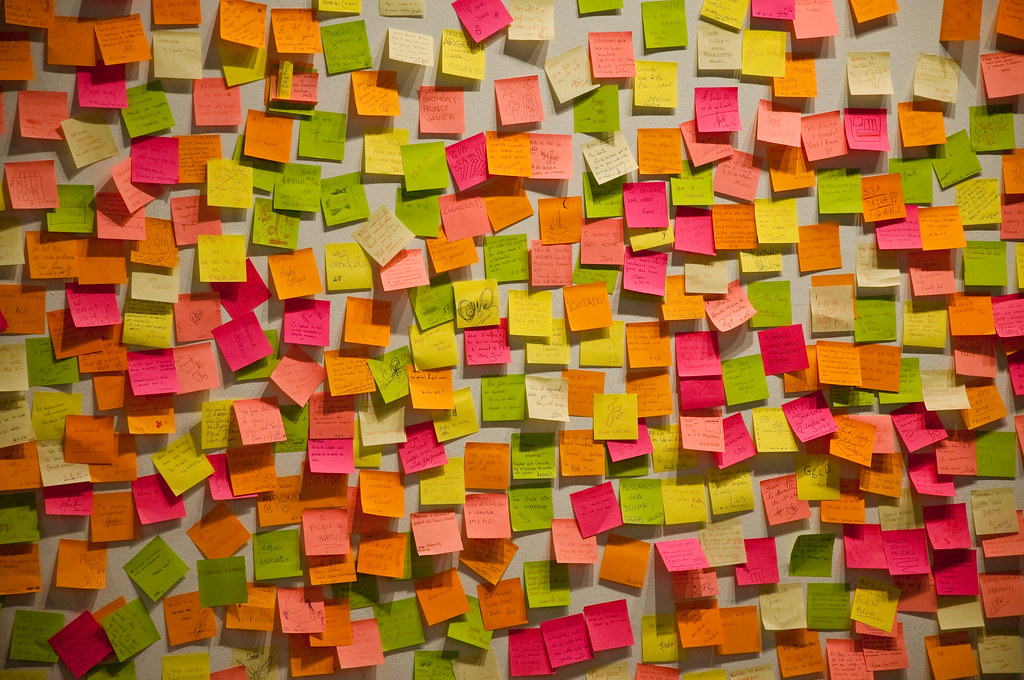 How could we do design thinking without Post-It’s!? (photo by Ignacio Palomo Duarte, Flickr)

Similarly, Google has also encouraged a 20 percent free time policy, but with a few more strings attached—projects had to be somehow related to Google. From this program, products such as Gmail, Google News, and Google’s autocomplete search system have emerged. However, as Ryan Tate remarks, “Because 20 percent time is less a formal program than an idea or operating spirit available to bullheaded employees, availing oneself of 20 percent time has long entailed sacrifices.” Former Google employee (and Yahoo CEO) Marissa Mayer described it as “really 120% time.” (qtd. in Business Insider).

So, official policy or not, the culture of having “x percent time” is really what seems to be important. “Past successes at both Google and 3M suggest that the freedom to focus on whatever employees choose has helped motivate them to come up with ideas they might not have had were all projects simply assigned to them,” writes Nussbaum. In recent years, Tate notes that corporate hackathons have become popular ways to encourage employee “passion projects.” Likewise, some US companies are starting to require that their employees take vacation. Others, like Huffington Post, have developed tools that automatically delete your emails while out of the office to discourage employees from working on vacation.  A couple of years ago, a Minneapolis ad agency made the news when they gave 18 of their employees the summer off (500 hours) to pursue whatever they wanted while still being paid and receiving benefits.

In Natural Capitalism: Creating the Next Industrial Revolution, Hawken, Lovins and Lovins write, “The past two hundred years of massive growth in prosperity and manufactured capital have been accompanied by a prodigious body of economic theory analyzing it, all based on the fallacy that natural and human capital have little value as compared to final output.” Work environments that focus on nurturing the human capital within an organization by allowing for creative free time, rather than insisting upon increased productivity output, are where the real potential for creative, disruptive, game-changing innovations lies.

During a Transdisiplinary Design Seminar class on December 4, 2015, my classmates and I were privileged to be joined by Nussbaum, himself. Referencing another article he had written in which he argued that “design thinking is a failed experiment,” Nussbaum expanded upon his claim, stating that when corporations took design thinking and converted it from a fluid process of innovation to one of efficiency, they effectively “killed” thinking like a designer because they wanted the process to be predictably reliable. In other words, they wanted a clear return on investment. Ironically, many companies who process-ized design thinking had dismal results and thus returned to their old ways of working because “thinking like a designer” wasn’t “efficient.”