Performance as a Means to Imagine Better Futures 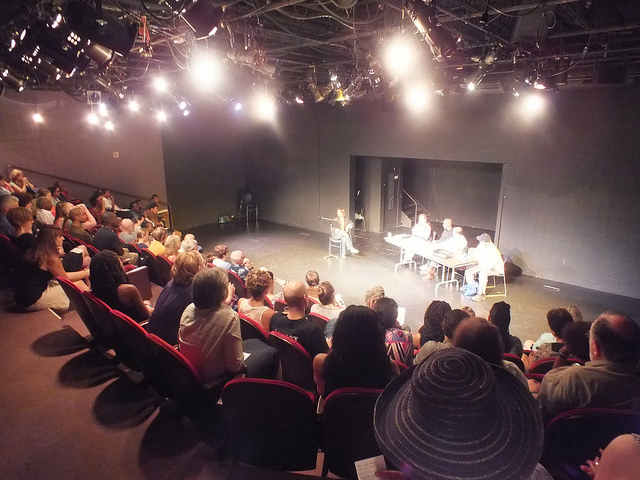 In Speculative Everything: Design, Fiction, and Social Dreaming, Anthony Dunne and Fiona Raby frame speculative design as a means to imagine preferred future situations and “create spaces for discussion and debate about alternative ways of being,” (2). Upon reading this, I couldn’t help thinking about the similarities between speculative design and performing arts in their mutual abilities to ask “what if…?” and invite discussion.

I first became interested in the power of performing arts to do more than entertain when I saw Beneath the Surface, a production by In the Heart of the Beast that investigated our connection to the water system. This beautiful performance inspired me to rethink my relationship with water—to consider what might also be possible. Like Dunne and Raby’s speculative design, it allowed me to better understand the present in order to imagine the future. In fact, it went so far as to convince me to no longer buy pre-packaged water and instead, carry around my own refillable container.

A few years later, while working at Pillsbury House Theatre, I was reminded time and again about the transformative power of theatre to ask tough questions and inspire rich dialogue. Tracey Scott Wilson’s Buzzer, for example, incited conversations around gentrification, race, class, and gender. One particularly motivated audience member organized her own discussion group around the play at a neighborhood coffee shop. Marcus Gardley’s the road weeps, the well runs dry transported audience members back in time to the first all-black town of Wewoka, OK, in the 1850s to ultimately ask us to reflect on present-day issues of diversity, identity, and community healing. And then there was Michael Milligan’s Mercy Killers, which took an emotionally personal look at the healthcare system, leading to post-show discussions on what the future of healthcare might look like.

All of these productions asked the audiences to suspend their own realities momentarily and to, instead, imagine the realities presented on stage. Certainly, film and literary works of art have also asked us to imagine in similar ways. However, the value I find in live performance comes from the intimate, person-to-person exchange between audience and performer. As Josh Sobel argues in an article on HowlRound.com, “All live theater is (from an audience perspective) inherently participatory.” By simply showing up, audiences participate on their own terms in the imagined scenario, asking “what if?” and speculating about how things might be otherwise.

On an even deeper level, community-based theatre organizations invite community members to participate in the actual creation process of a production. Through story circles, participants share their experiences which shape the production’s storyline, and some participants even perform in the final production. The goal, as stated by Wonderlust Productions, is “to create theater that truly invites everyone in, to forge new ways of seeing our common experiences, to transform the past into a better future.”

In his 1992 book Games for Actors and Non-Actors, Agusto Boal wrote, “Theatre is a form of knowledge; it should and can also be a means of transforming society. Theatre can help us build our future, rather than just waiting for it,” (xxxi).

Let’s take a page from performance and practice a design that authentically invites participation, imagination and critical discussion. “We believe that by speculating more, at all levels of society,” wrote Dunne and Raby, “…we can help set in place today factors that will increase the probability of more desirable futures happening,” (6).